On July 19, 2014, the Mozilla Kerala community conducted a Webmaker Party and a Firefox OS Appday at Malappuram to complement the Webmaker Party Season. The name Malappuramliterally means “atop the hills”. It is a northern district in Kerala endowed with the bountiful gifts of nature. Mozilla Kerala set its foot in MES College of Engineering, Kuttippuram with an aim to unite the Malabarians once again. This time for the Webmaker Party. MESCE is one of the reputed colleges of the district with an eco-friendly campus. The Mozillian team consisted of Abin Abraham, Anush A, Binoy Balu, Faheem K, Neethu Sajeevan, Nidhiya V Raj ( that’s me

The webmaker event was hosted by MATRICS – the Computer Science department of MESCE, Kuttippuram. The event started at 9:00AM, just as planned. The Firefox club of MESCE was inaugurated by Mr. Sunny, Head of the MCA department by hitting the first like on the Facebook Page of “MOZTRICS” ( Derived out of MOZILLA + MATRICS

). The team of 12 Mozillians including our WoMoz team were ready to start our event. The event organizer, Varghese started off with an introduction. He made a short description about each of us and invited Praveen “psbots” Sridhar to give a brief talk on “Open Source Technologies”. After Praveen’s talk, Binoy introduced the Mozilla Community and its activities.

And we also had a social media competition for the participants. Soon, Twitter got live with hashtags #WebMakerKerala, #MakerParty, #TeachTheWeb, #Mozilla, etc. We got to know that most of the participants were totally new to the world of the web and wanted to cheer them up before we got into the real stuff. So Vipin came up with an ice-breaking session. That was the real fun :D. We split them into groups and gave them a mission to find a way to escape off an island using the little available resources they had with them. Each group was assigned to one Mozillian. Everyone drafted out their plan and presented it. That really broke the ice between the participants.

After all the fun, we moved on to the real deal for the day, the Webmaker Party and the Firefox OS Appdays. Anush kicked off the Webmaker Party with the basics of web technologies including HTML, CSS, etc. He gave an introduction to the latest trends as well. The students worked on some sample codes using X-ray goggles. Varghese was happy to cover the next session on CSS. He started from the basics and gave them exercises to practise on. 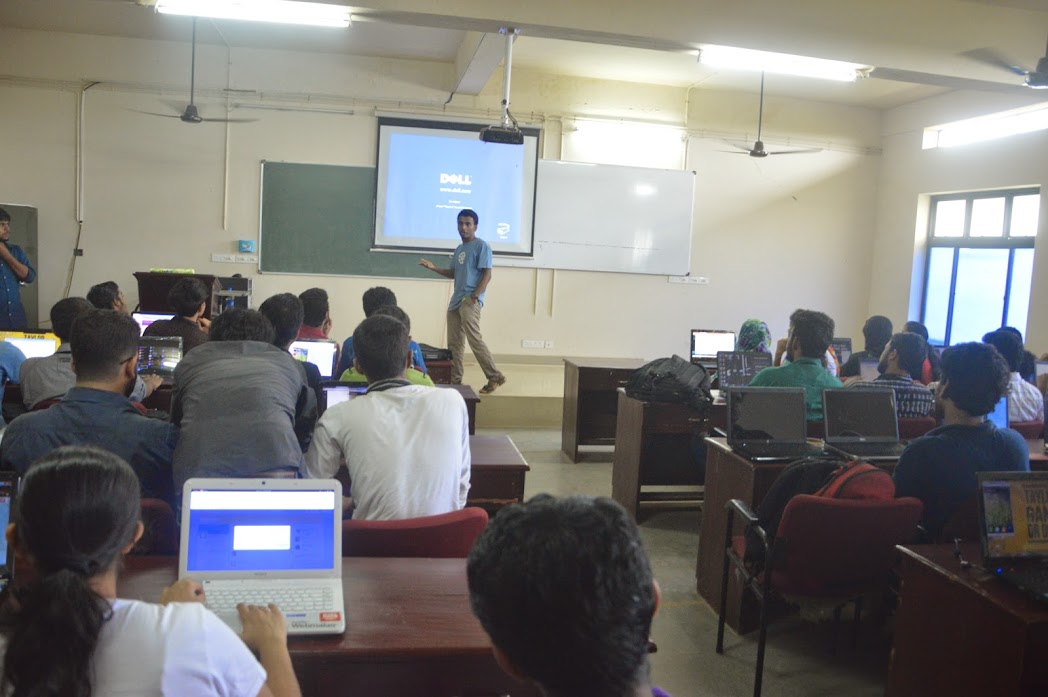 At the same time, Vipin had started up the Firefox OS AppDay. He explained the Firefox OS architecture, its applications, etc. Next, it was the Fire Starter session for Praveen to explain the paper prototyping model and all. He introduced the basics of Firefox OS, simulation and all. The participants were really excited and that helped us to drive them to making cool apps. We gave them some time to come up with some ideas to make apps. Out of the ideas, “Secret Messenger” and “Blind-man Helper” were really outstanding. 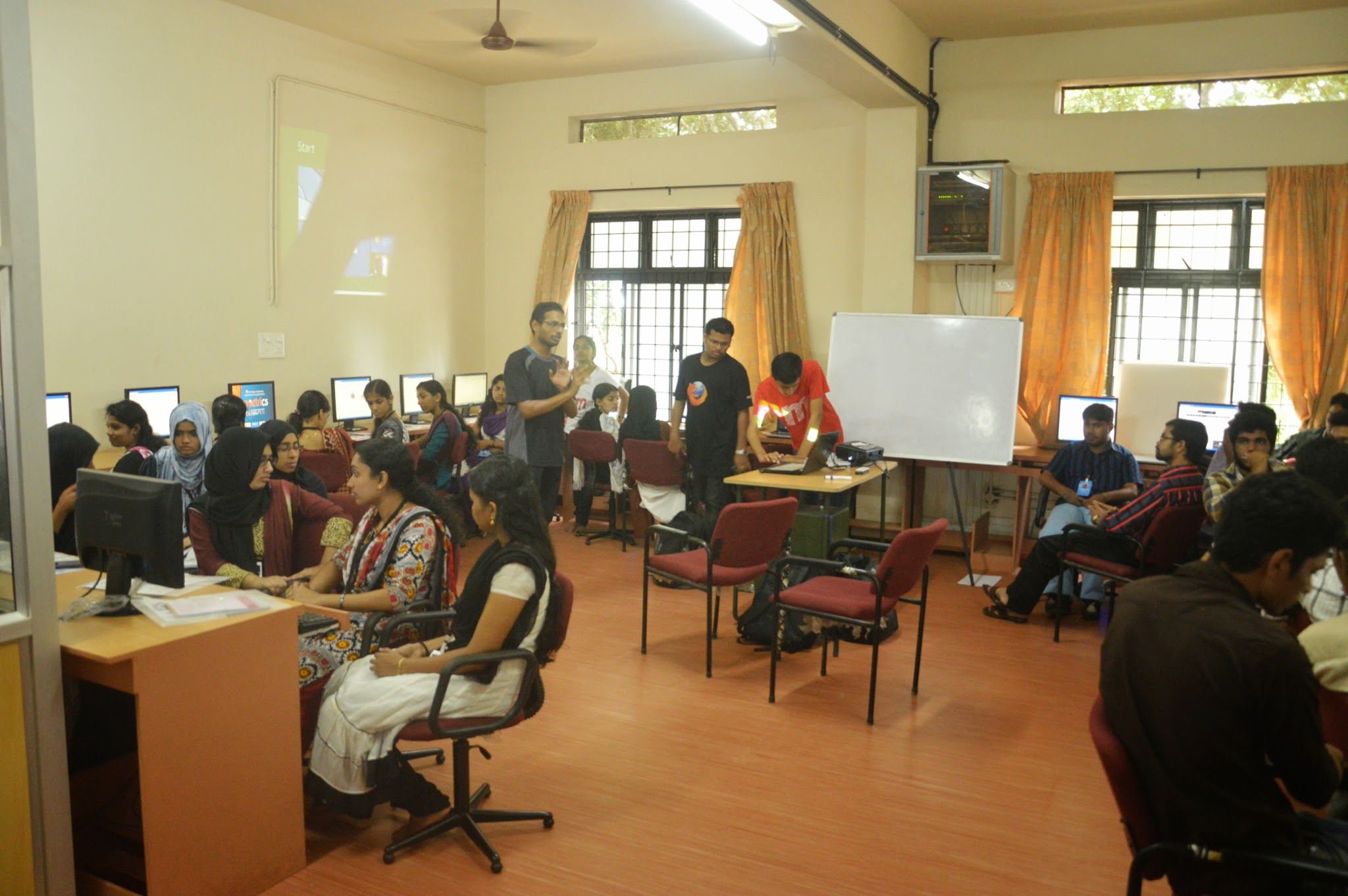 By this time our lunch was waiting and we were all tired and hungry. So, we broke for lunch. We quickly finished the meals for the photo sessions. Though it was raining throughout the day, the sun flashed its light for us to get cool pics.

Right after the photo sessions, we resumed with our respective sessions. At the Webmaker end, Varghese continued with the CSS. And at the AppDay end, Siraj took up the topic “Web APIs”. He showed them live demonstrations on the Firefox OS Simulator, but, unfortunately it got stuck in between. Praveen seized the opportunity to introduce the Bugzilla. The simulator started working AppDay, AppDev, AppDevelopment, bmx, Bugzilla, CSS, Firefox OS, HTML, MakerParty, Malabar, Mozilla, Responsive Web Design, TeachTheWeb, Twitter Bootstrap, Web API, Webmaker, Webmaker Kerala right after the introduction to Bugzilla by Praveen. The participants didn’t even notice the break.

After Varghese‘s session on CSS, it was Nidhiya‘s (my) turn to explain “Responsive Web Design Concepts and Twitter Bootstrap”. With the limited amount of time we had, I made short descriptions and shown them some demos. Meanwhile, at the AppDay front, the participants were busy working on their hacks. Since the allotted time was about to end, we had to wind up the sessions and brought the participants to the main auditorium once again. There, we gave feedback slips, swags, certificates and all. The winner of the social media contest was awarded with a pen-drive. The faculty and student coordinators thanked us for conducting the event at MESCE, Kuttippuram. We thanked all the authorities, faculty, coordinators, volunteers and students for their valuable effort to make the event a grand success. We had a handful of active volunteers who was running around to make sure that the event ran smooth. Some names are worth mentioning : Nadeem, Roshan, Sadhique, Najla, etc along with lot many volunteers. And of course, the MESCEians are to be praised for their hospitality. Their feedback proved to us that the event was indeed a successful one. We returned after a great day at MES College of Engineering, Kuttippuram and content after having organized the first Webmaker Party of the season in Kerala and a Firefox OS AppDay.

The whole crowd at MES College of Engineering, Kuttippuram